The Story of Eye Banking in Baguio City: Sharing the Gift of Sight, Transcending Cultural Boundaries 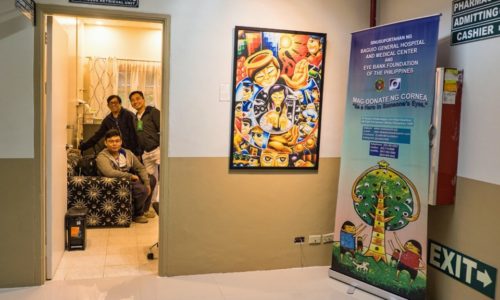 The Story of Eye Banking in Baguio City: Sharing the Gift of Sight, Transcending Cultural Boundaries

When the Spaniards came to colonize the Philippine Islands, they, themselves were never able to fully penetrate the Cordilleras. Due to the rugged terrain of the area and the fierce nature of its people—who would not easily surrender—outsiders had a very little influence on the Cordilleras.

The Cordilleran culture, hence, is largely molded by the geography of the Cordilleras and their common heritage of resisting invading imperial and foreign powers, including the continuing adverse encroachments by ‘lowlanders’.

Customs and cultural taboos are highly observed here. What is sacred and profane are determined by its thousand-year-old tradition passed on from generation to generation.

In this context, it was a difficult—nay impossible task—in setting up a facility that concerns organ donation: a topic which is considered prohibited by the Cordilleran elders.

But who would’ve thought that an eye banking facility can be established right in the heart of the Cordilleras?

This is the first-ever satellite facility of the Eye Bank Foundation of the Philippines in the Cordilleras. The establishment of BGHMC Eye Bank proved our belief otherwise.

However, setting up a facility is one thing, having yields from consented organ donation is another.

Conditions and experiences on the ground proved us wrong then again. Just two (2) months since the start of its operations, BGHMC Eye Bank yielded eleven (11) successful consented retrievals.

In perspective, BGHMC’s yield is at par with Metro Manila’s average of 11 retrievals.

What’s the secret behind BGHMC’s success? Are the supernatural forces of universe conspiring in favor of BGHMC Eye Bank?

It’s all hard work—a painstaking process of convincing not only the grieving families but the people of Cordilleras as a whole so that they may understand what cornea and eye donation is all about.

The experience of Baguio General Hospital and Medical Center tells us that through awareness and capacity building, organ donation can be made possible even in the unlikeliest places.

In celebration of the Sight Saving Month, the Eye Bank Foundation through its partners like the Baguio General Hospital and Medical Center, commits itself further in its mission in transforming lives through restoring sight; and in increasing the number of eye and corneal donations in the country through public education, advocacy campaigns, and cooperation with various individuals, groups, and government institutions.

Together, we can create a society where the present and future needs for corneal transplantation are fully met.