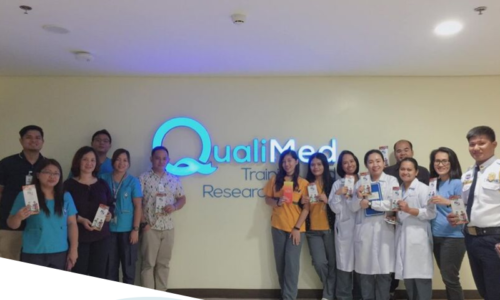 Department heads and representatives from sections and units of Qualimed Hospital were present and proactively participated in the activity.

She noted that Qualimed Hospital in Sta. Rosa, Laguna plays an important role in increasing corneal and eye donation due to its strategic location where trauma cases are recorded.

Eye Bank’s Community Relations Officer, Mr. Elijah San Fernando, explained the functions of Eye Bank and how it operates in the country.

Ms. May McCremens, Transplant Coordinator of Eye Bank, equipped Qualimed’s personnel with the proper information regarding the referral process of potential donor families.

She provided the flowchart of referral used by Eye Bank which can be integrated with Qualimed’s existing processes.

The second part of the activity is being planned by the partnering institutions and is expected to be conducted as soon as possible. This includes: practical guide in approaching possible donor families and integration of referral system in Qualimed Hospital.